Champions in Primary Care – Our Vision

Champions in Primary Care – Our Vision 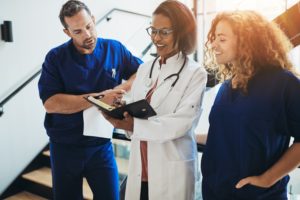 We are creating a cadre of clinical champions in primary care and community services whose work ensures that axial spondyloarthritis (axial SpA) is higher within the clinical reasoning of primary care professionals, so that patients who present with suspected axial SpA are identified at the first presentation and urgently referred to rheumatology.

Programme participants will embark on a two-year development programme. 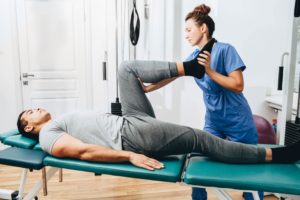 Why is this programme needed?

Primary care and community services have a critically important role in identifying patients with suspected axial SpA and referring them directly to rheumatology. Most people with suspected axial SpA will consult primary care in the first instance, and around 5% of patients with chronic back pain attending primary care are estimated to have axial SpA[1]. However, time and again, people with axial SpA report to NASS that their GP and MSK clinicians failed to identify their axial SpA, misdiagnosing it as mechanical pain or ascribing psychosomatic reasons.

Misconceptions about the condition remain among primary care professionals, with GP textbooks still referring to the late stages of axial SpA with a focus on male predominance and late disease features such as fusion of the spine[2]. The GP might not ask the right questions, might refer for the wrong MRI, refer to a different speciality depending on the main presenting symptom, or be concerned about the cost of referral. Those testing negative for HLA-B27 are often assumed to have mechanical back pain as are those without raised inflammatory markers in their blood.

A recent study[3] explored musculoskeletal physiotherapists´ awareness, knowledge and confidence in screening for signs, symptoms and risk factors of suspected axial SpA and criteria for rheumatology referral.  It found that only 67% (88/132) identified inflammatory pathologies as a possible cause of persistent back pain, only 60% recognised the axial SpA vignette compared to non-specific low back pain (94%) and radicular syndrome (80%), and awareness of national referral guidance was evident in only 50% of ‘clinical reasoning’ and 20% of ‘further subjective screening’ responses. There was also misplaced confidence in recognising clinical features of axial SpA (≥7/10) compared to knowledge levels shown, including high importance given to inflammatory markers and HLA B27 (median = 8/10). It concluded that musculoskeletal physiotherapists may not be giving adequate consideration to axial SpA in back pain assessments. Awareness of national referral guidance was also limited. Professional education on screening and referral for suspected axial SpA is needed to make axial SpA screening and referral criteria core knowledge in musculoskeletal clinical practice, supporting earlier diagnosis and better outcomes.

Primary care professionals report numerous barriers to diagnosing axial SpA[4], including low prevalence among patients with chronic back pain, the lack of a definitive diagnostic test, the slow progression of the condition and the intermittent nature of the pain that patients experience.

Consequently, axial SpA is likely to be low within the clinical reasoning of most GPs and MSK clinicians, and lacks visibility within primary care. 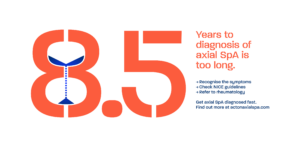 Benefits to participating clinical champions and their host organisations

Those participating will benefit from enhanced leadership skills and greater confidence in undertaking service improvement work. They will develop their networking skills and enlarge their professional network. They will gain access to resources and expertise as well as create new resources for other healthcare professionals. We will seek CPD accreditation.

Their work will result in earlier identification of patients with suspected axial SpA and quicker referral to rheumatology. We also anticipate benefits in terms of better primary care management of axial SpA patients. With an upskilled primary care workforce, one would expect to see a better understanding of medication, exercise, fatigue and mental health in axial SpA. 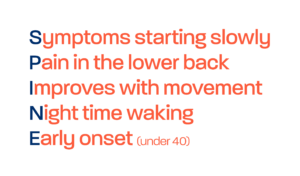