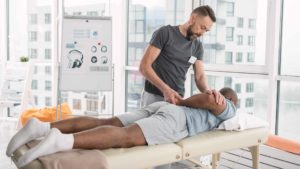 Awareness of axial spondyloarthritis among chiropractors and osteopaths: findings from a UK Web-based survey.

Large web-based survey of 237 chiropractors and 145 osteopaths demonstrated that although overall knowledge of ankylosing spondylitis is good among chiropractors and osteopaths, the term axial SpA is poorly understood. Specific learning needs include gender preponderance, awareness of acute anterior uveitis and the availability of biological therapies. There is lack of confidence in the onward referral process to rheumatology via the GP. Only 63% and 25% were familiar with the terms axial SpA and non-radiographic axial SpA, respectively. Only 29% recognized that axial SpA was common in women.  Seventy-seven per cent were confident with inflammatory back pain. Respondents routinely asked about IBD (91%), psoriasis (81%), acute anterior uveitis (49%), peripheral arthritis (71%), genitourinary/gut infection (56%), enthesitis (30%) and dactylitis (20%). Forty-three per cent were confident with the process of onward referral to rheumatology via the GP. The principal perceived barrier to onward referral was reluctance by the GP to accept their professional opinion.